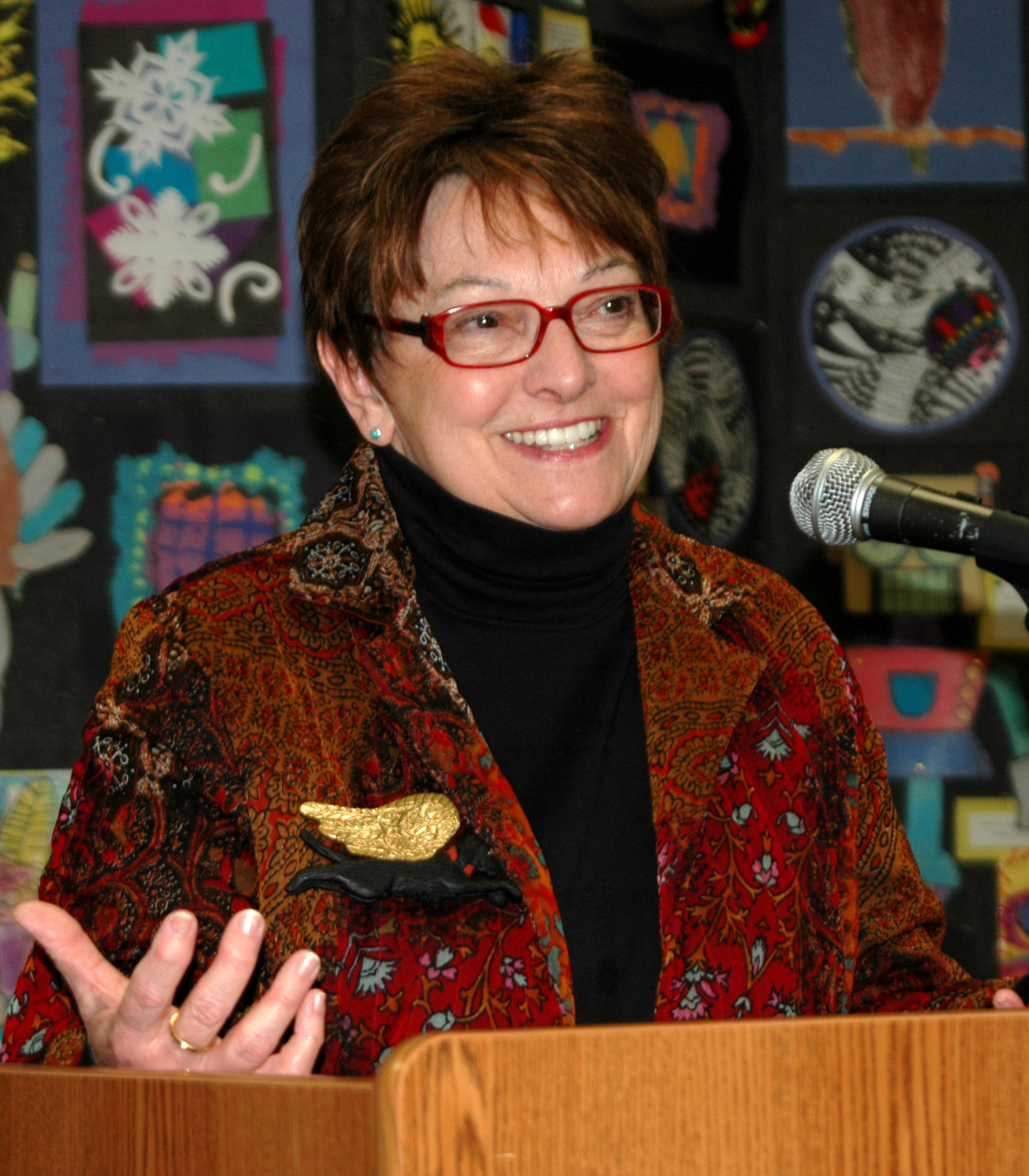 During a reading at Wisconsin Rapids.

I have always loved dogs.

Frozen Charlotte, carved out of a book titled "Journey of the Dead." 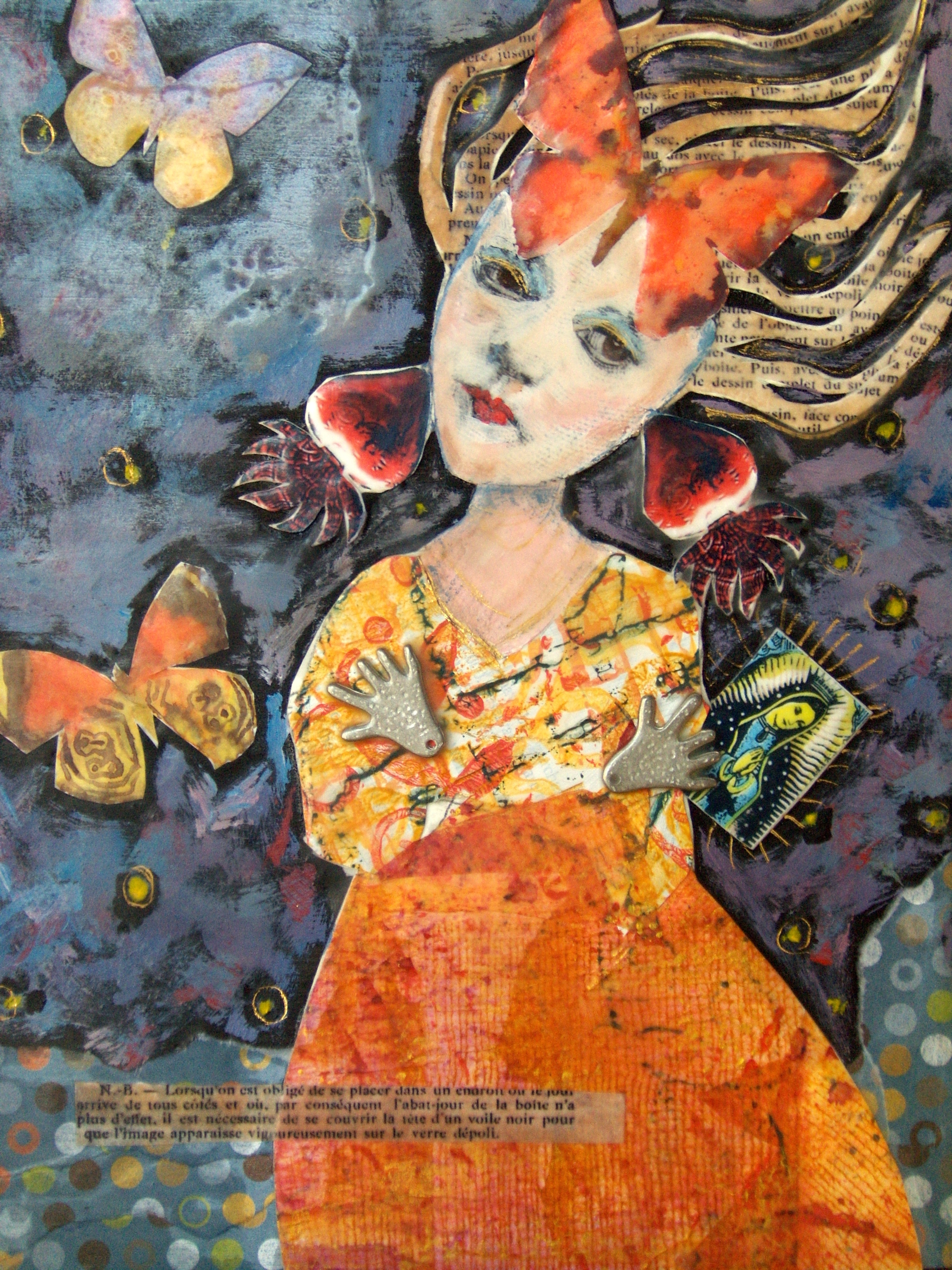 My first work of encaustic collage.

I grew up in Manawa, a small town in north-central Wisconsin and my childhood was fairly idyllic. It felt quite natural to draw and write and sing and play musical instruments, but I also thought everyone else was nearsighted,until I got glasses in 7th grade. My first real job was selling popcorn at our local movie theater, but the first clue that I might want to be a writer came when I was babysitting.

The editor of our town's newspaper, The Manawa Advocate, encouraged me to write about trips that our band took to Miami Beach and New York City -- we had a pretty good band. I also babysat for his family's children, five under the age of five (triplet babies!). One evening he and his wife went to the Green Bay airport to pick up a reporter for The Ladies' Home Journal who was going to write an article about them ("Five Under Five") and when they returned, her suitcase was placed in the middle of the living room floor. It was red and green plaid and embroidered with her initials. That made quite an impression.

Still, I went on to college to pursue my dream of becoming a doctor and helping Dr. Schweitzer cure the world of leprosy.

After several semesters there and due to my my disastrous math skills, my advisor at the University of Wisconsin-Madison (the head of Organic Chemistry) encouraged me to switch to English as a major. I didn't need much convincing. There was no creative writing offered at UW then, but I contributed short stories in several English lit classes and eventually convinced the Journalism school to let me take some courses in feature writing. I was given a grant to research an article on the influence of the church in the inner city of Chicago. I also played oboe in the concert band.

Except for the early travel pieces in my hometown paper, I wasn't published again until my poetry appeared in the prestigious literary journal "Hawk & Whippoorwill," edited by Wisconsin author August Derleth. By that time I was a young wife and mother. Derleth drew from his own deep Wisconsin roots to write in a variety of genres. He critiqued and encouraged my work and became my mentor in poetry and fiction until his death in 1971.

Meanwhile, I was married to a young lawyer I'd met when we were students at UW. He now had his own practice and didn't want his wife to have a job, so I learned about writing discipline with a weekly column for The Boscobel Dial and the Crawford County Independent.

In addition to the books mentioned on my webpage, I eventually published an abundance of poems, short stories and non-fiction articles in magazines and literary journals that received honors and awards. I saw my screenplay for Annzinetta develop into a made-for-TV movie and broadcast nationally by Wisconsin Public Television. I was invited to contribute to the Oxford Encyclopedia of American Food and Drink, co-produced Views of a Cameraman, a film on Henry Hamilton Bennett (whose biography I had researched). By that time my marriage had dissolved and I had been teaching writing classes for the UW-Extension and the Rhinelander School of the Arts. In 1989 I earned my MFA from Vermont College with an emphasis on poetry. I taught in the Goddard College MFA in Writing program for four years and led summer writing workshops at the Chautauqua Writer's Center in western New York. More recently I taught fiction writing at The Clearing, a Danish Folk School in Ellison Bay, Door County, Wisconsin for ten years.

Along the way my writing was nurtured by fellowships to the MacDowell Colony and the Ucross Foundation, and a Wisconsin Arts Board Individual Artist Grant. The Weston Cate Fellowship from the Vermont Historical Society helped finance my research into the life of Achsa Sprague -- which became the historical novel, Seven Years of Grace. One of my proudest moments occurred when the State of Vermont placed an historical marker at the Green Mountain location of Achsa's birth, in Plymouth Notch, VT.

In addition to my published work, I do have manuscripts that have yet to be submitted. Double Exposure: A Mother/Daughter Travel Journal traces a remarkable trip my daughter and I took to France, England, Wales and Scotland in 1983 when we saw the entire Royal Family, conversed with Bono and had coffee with Terry Jones in his garden. It has never been seen by an editor. I've also been compiling poems for my 5th collection of poems, The Night You Played the Snowy Mountain Blues, which has a long way to go before it's complete.

For many years I was determined to write a novel. Star Lake Saloon & Housekeeping Cottages underwent an appalling number of rewrites. I'm indebted to the University of Wisconsin Press for taking a chance on an inexperienced novelist, grateful for their editorial assistance and their continued acceptance of my work -- which includes The Waters of Star Lake and Night Sisters. I'm looking forward to their eventual publication of the 3rd book in my Northern Wisconsin series: The Last Resort on Star Lake. The manuscript is currently in their hands.

Yes, I write every day. I have kept a daily journal since the early 1960s. I have two children, Jay Rath (a writer and cartoonist) who also makes Spring Green his home, and Laura Rath Beausire (a travel writer) in Niwot, CO. I'm now married to Del Lamont and we share an extended family that includes 6 children, 13 grandchildren and 4 great-grandchildren.

We live outside Spring Green, Wisconsin -- a stunning area of the Driftless Region that has a pleasant mix of artistic and rural attractions along the Lower Wisconsin River. It's an attractive place for hikes and bicycle rides. When I find time, I like to pursue encaustic, acrylic and multi-media creations. I'm a proud member of the 100 Bear Club -- part of the Mother Bear Program out of Minneapolis -- which aims to provide comfort and hope to children in emerging nations who have been affected by HIV/AIDS. Currently I'm knitting Bear #105.

Our household is enhanced by the presence of Lizzy Lindsay Lamont, a silver-charcoal Labrador; Emma, a rescued calico Manx; and Sally, a black Labrador puppy.

Recently I've resumed my practice of Yoga, and taught myself to play the ukulele so I can play tenor uke with three other women in a popular performance group we named "Wild Love," known for our 3-part harmony. I've served as the president of the Friends of the Spring Green Library and have belonged to the River Valley Book Club for the past 18 years.

I didn't cure leprosy but readers are moved by my words. It's also reassuring to know there are a great many children in sub-Saharan Africa who cuddle my bears in the darkness of night. That warms my heart and keeps me buying yarn. 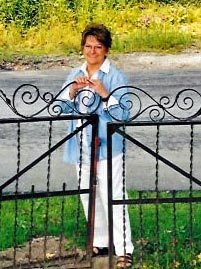 At the cemetery in Plymouth Notch, Vermont, while researching the life of Achsa W. Sprague. 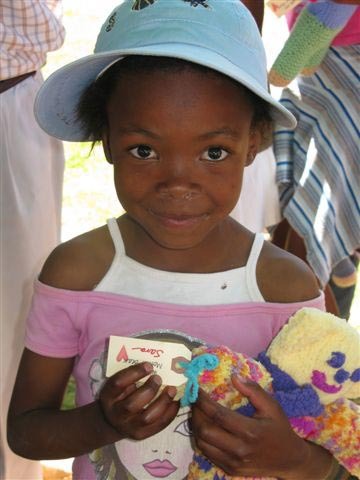 A little girl in South Africa who has just received one of my bears. 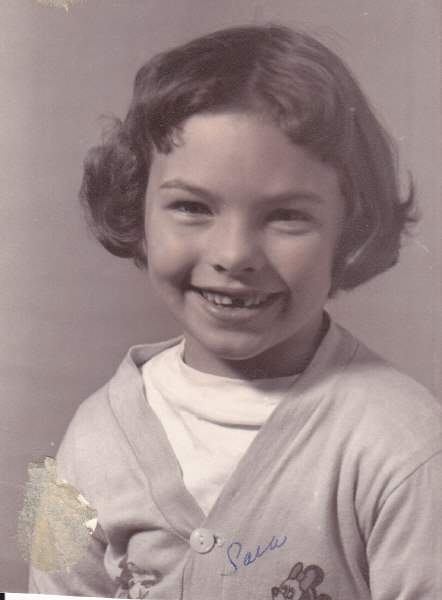 At age six in a Minnie Mouse sweater and missing a front tooth. 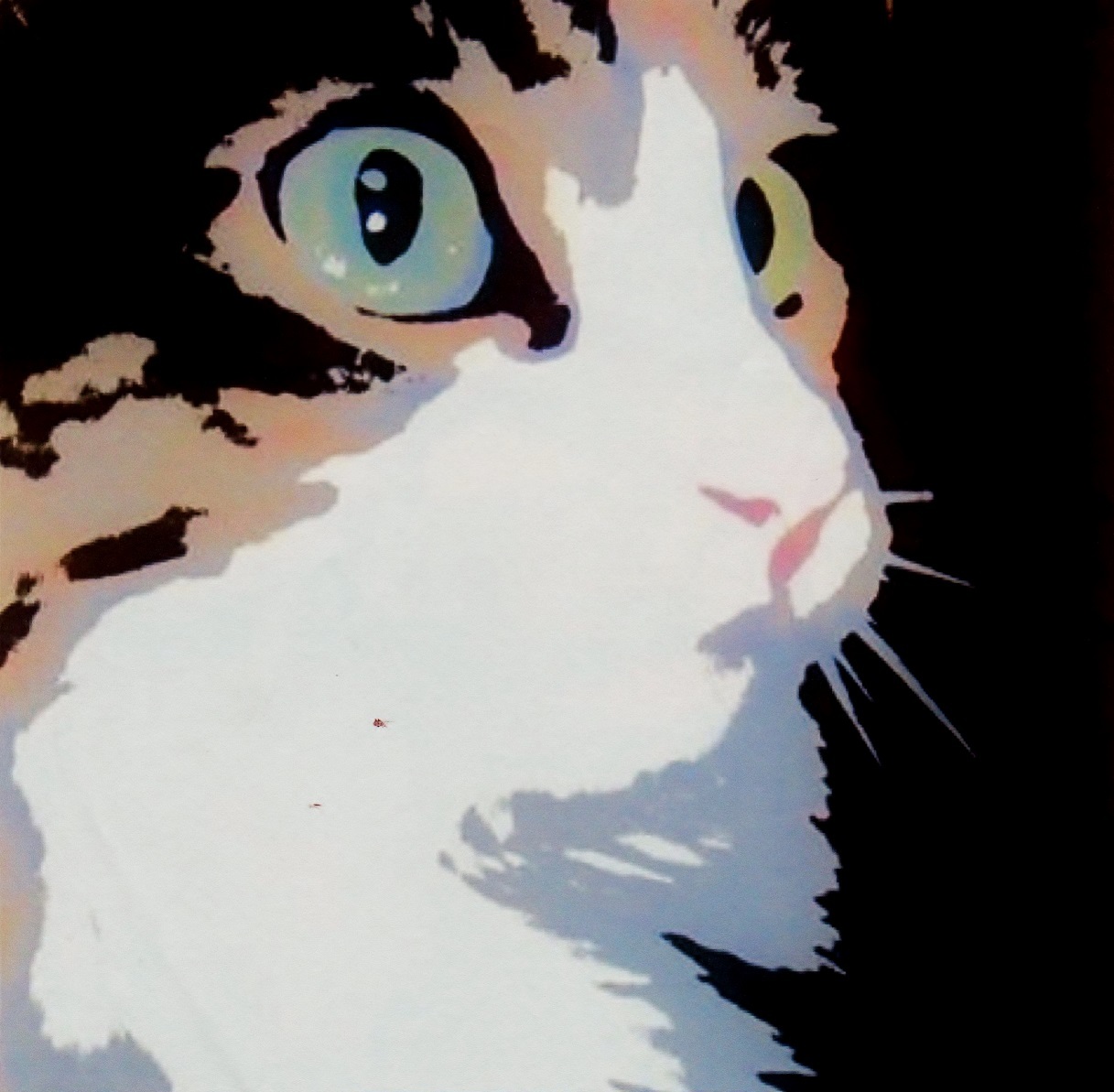 My painting of Nellie, our (late) Maine Coon.
Loading…}